Sound financial practices are a core value of any successful enterprise; and should be.  It may come as a surprise that monitoring money spent against planned expenditures is not the best way to evaluate the progress of software projects.  The reason is simple:  by the time financial measures indicate that a project is off track, it is often too late to take effective corrective actions or identify alternative courses of action.

Here is an example that illustrates this.  Let’s take a hypothetical project plan with these characteristics:

According to this plan, the project should have a labor cost $1.245 million.  Now, using a software project monitoring tool, SLIM-Control, let’s see what the project looks like at the end of September.

If we only look at money spent, the project is on track since planned and actual expenditures are exactly the same.  However, when we look at the progress of the actual work completed, a different story emerges.  The project got off to a slow start and the gap between what was planned and what has been delivered has increased every month.  Unless this is rectified, the project will last longer and cost more than originally planned.  Here is a forecast of what will happen if the current trend continues.  The project will complete over two months late and cost an additional $215,000.

In all production environments, there exists a tension between competing outcomes.  Four variables come to mind:

These do not exist independently of one another.  Emphasizing any one impacts the others.  For example, to compress a project’s schedule, additional staff is typically added which increases the cost.  Larger team size also increases communication complexity within a project which leads to more defects (lower quality).  The development of software  presents a unique issue that may not be present or is at least more muted in manufacturing:  non-linearity.  Key examples of this are the relationships between cost/effort and schedule and the one between schedule and quality.

Let’s look at some examples.  In the charts below, regression trend lines for schedule and effort vs. size were developed from the QSM software project database.  The darker center lines represent average schedule and effort outcomes as delivered product size grows.  The lighter lines are plus and minus 1 standard deviation.  Roughly 2/3 of the projects in the database fall between the standard deviation lines.  Note the scale on the axes, which is log-log.  This is because the relationship between the amount of software developed and schedule duration or effort is non-linear. 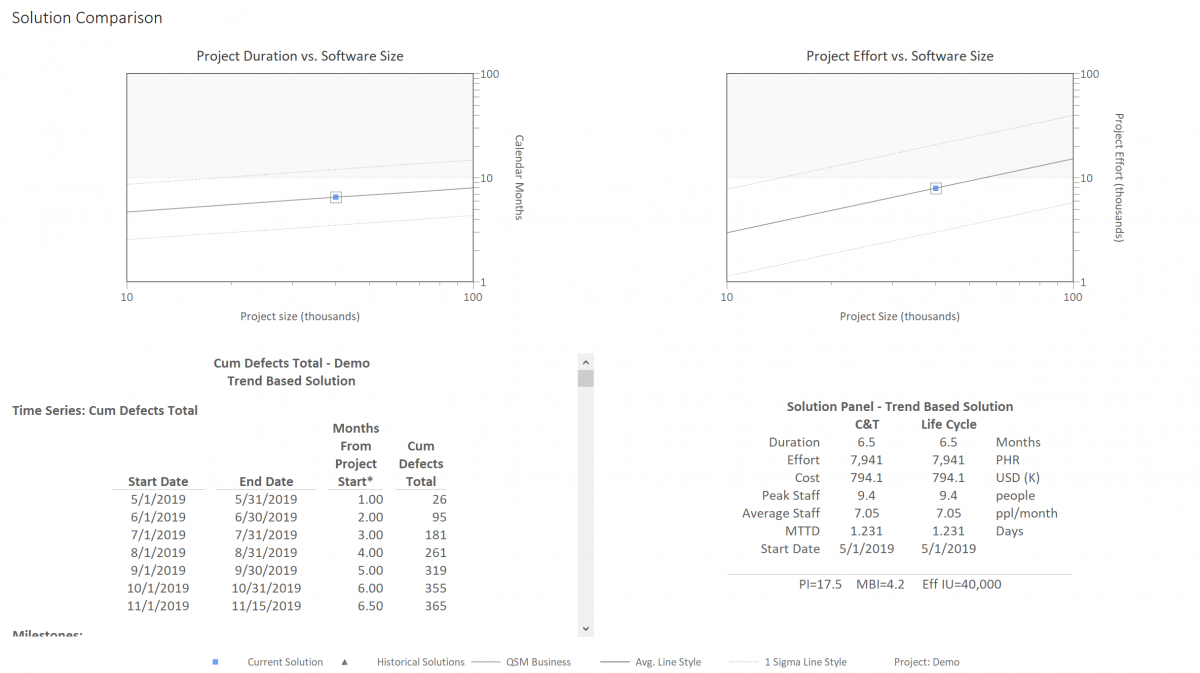 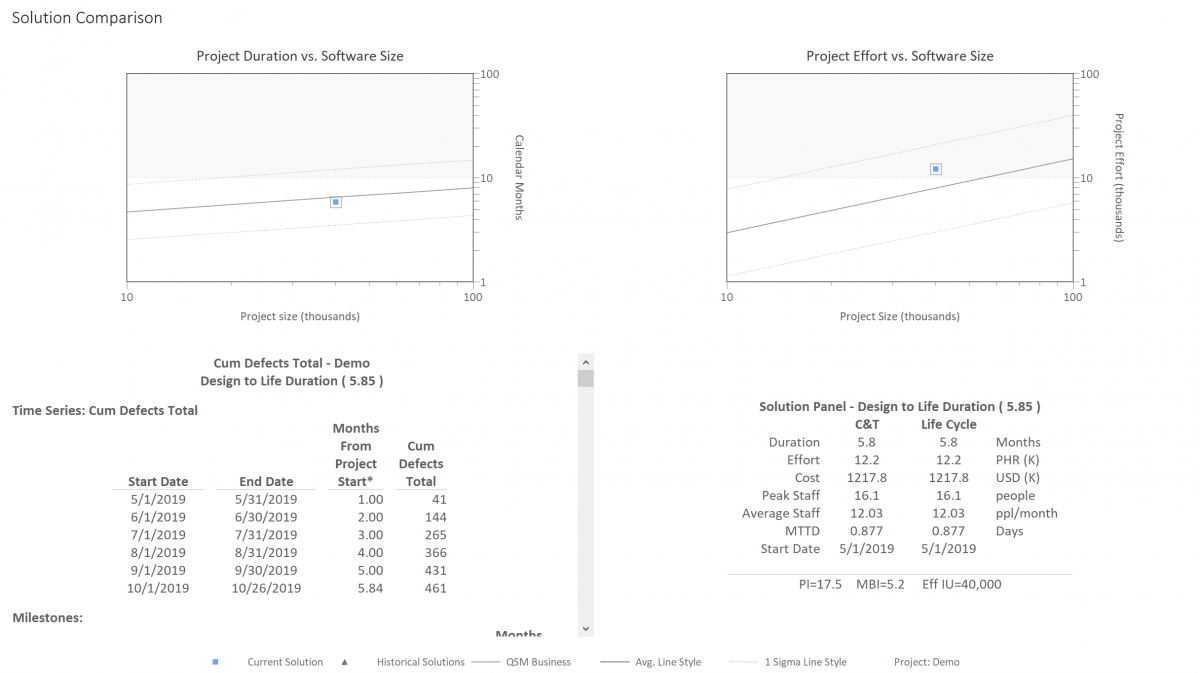 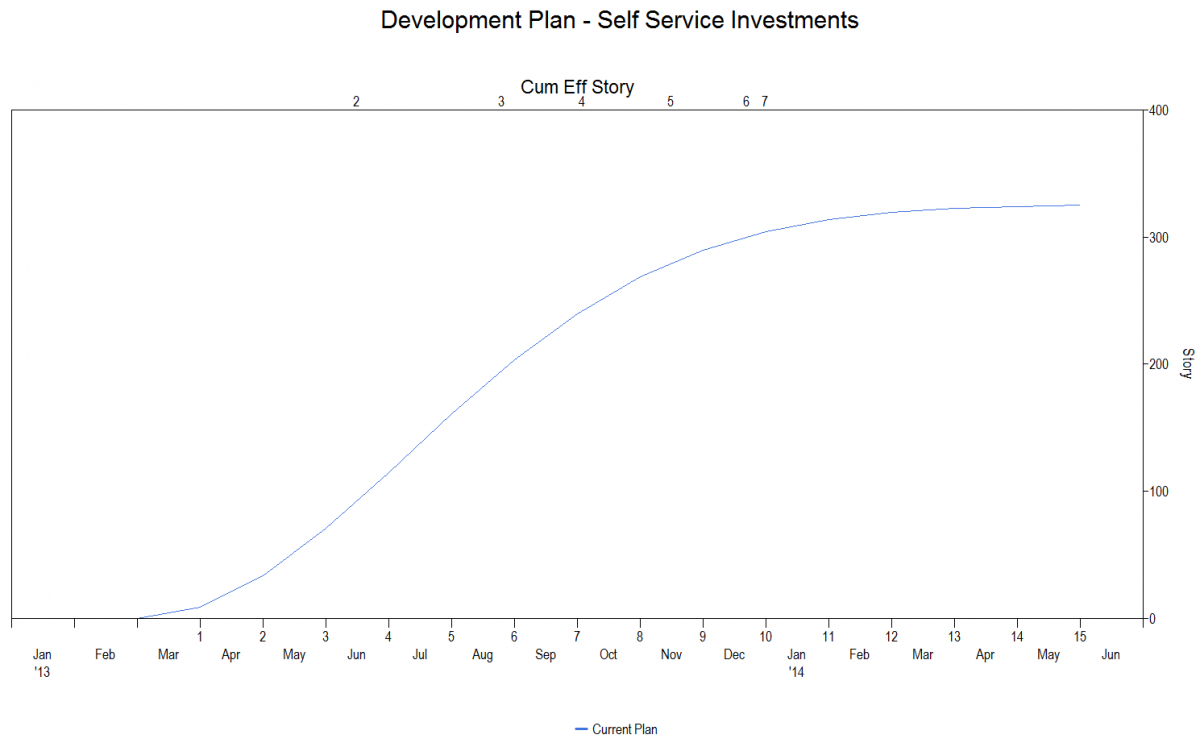 QSM recently published the seventh and final article in the QSM Agile Round Table series. The QSM Agile Round Table was formed to discuss the role of estimation in agile environments. QSM customers shared their questions, challenges, and experiences on the relevance and benefits of scope-based estimation in an agile environment. Participants had several questions about measuring effort and productivity, and whether there are special issues around how to define and collect these metrics in an agile environment. In this article, Andy Berner identifies best practices for measuring effort and productivity in agile and discusses how the two are related. 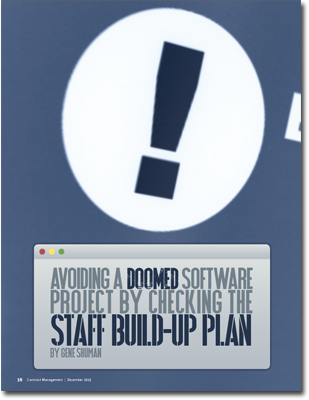 The staff build-up plan defines how many, what kind, and when staff are needed for the entire project. Too many or too few, bringing them on too early or late, employing the wrong mix of expertise or experience - avoiding all these pitfalls with a staff build-up plan will ensure a successfully staffed project. Reviewing proposals for a complex project, such as major software development or support, is a challenging activity. Since labor is the major cost and feasibility determinant for such projects, requiring the submission of a "staff build-up plan" and verifying its realism is crucial in determining whether a proposed project can realistically succeed. In this article for Contract Management Magazine, QSM's Gene Shuman identifies the key components of an effective staff build-up plan.

What does a typical software project in the QSM historical database look like, and how has “what’s typical” changed over time? To find out, we segmented our IT sample by decade and looked at the average schedule, effort, team size, new and modified code delivered, productivity, language, and target industry for each 10 year time period.

During the 1980s, the typical software project in our database delivered 154% more new and modified code, took 52% longer, and used 58% more effort than today’s projects.   The table below captures these changes:

Effort seems like a metric that's very straightforward, but there is a lot of complexity here, particularly if you are performing benchmark analysis. Recently, I was tapped to help out with a benchmark assessment. One of the metrics that the customer wanted to analyze was effort per function point. "Effort" on its own is very vague, and while the customer might know which phases or activities his organization uses, I can't be sure that definition will match what I think he wants. In order to effectively benchmark, we need to make an apples-to-apples comparison by examining what is really behind the effort number, so it was necessary to send the client phase and activity definitions.

Here are some helpful definitions to help you understand which activities are included in each phase:

After reading Best Projects/Worst Projects in the QSM IT Almanac, a SLIM-Estimate® user noted that the Best in Class Projects expended around 28% of their total project effort in analysis and design (SLIM Phase II) compared to 10% for the Worst in Class Projects. She wanted to know how she could tune her SLIM-Estimate templates to build in the typical best in class standard for Analysis and Design.

In SLIM-Estimate, effort and duration for phases I and II are calculated as a percentage of Phase III time and effort. To create a template for estimating phases II and III that will automatically allocate 28% of total project effort to analysis and design (Phase II), follow these simple steps.

That’s it. Your estimates based on this template will now automatically allocate 28% of total project effort to Analysis and Design (Phase II).

This procedure assumes that your estimates will be for SLIM Phases II and III, which, we have found, is the typical scope for most project estimates. However, if your estimates include Phases I and/or IV, you may have to increase the effort percent a bit to achieve the desired result.

Blog Post Categories
SLIM-Estimate Tips & Tricks Effort
We use cookies and similar technologies to provide you with the best possible experience on our website (for personalization, analytics and performance). Agree