If you were unable to attend our recent webinar, "Leverage Top-Down Estimation for Better IT Planning," a replay is now available.

Technology organizations spend millions of dollars a year on IT project planning, delivery, and proposal work. Major questions around cost, duration, scope, and quality are at the forefront of the decision making process. All of this combined with the pressure of ensuring plans and proposals are realistic can make this process a challenging one.

Being able to generate early, top-down estimates while leveraging industry data and empirically-based models is essential to negotiating realistic goals and meeting customer expectations. In this webinar, Keith Ciocco will show how QSM’s SaaS solution, SLIM-Collaborate, can be leveraged early in the planning and proposal process to help meet these challenges.

Technology organizations spend millions of dollars a year on IT project planning, delivery, and proposal work. Major questions around cost, duration, scope, and quality are at the forefront of the decision making process. All of this combined with the pressure of ensuring plans and proposals are realistic can make this process a challenging one.

Being able to generate early, top-down estimates while leveraging industry data and empirically-based models is essential to negotiating realistic goals and meeting customer expectations. In this webinar presented on Tuesday, Feb. 23 at 1 PM EST, Keith Ciocco will show how QSM’s SaaS solution, SLIM-Collaborate, can be leveraged early in the planning and proposal process to help meet these challenges. 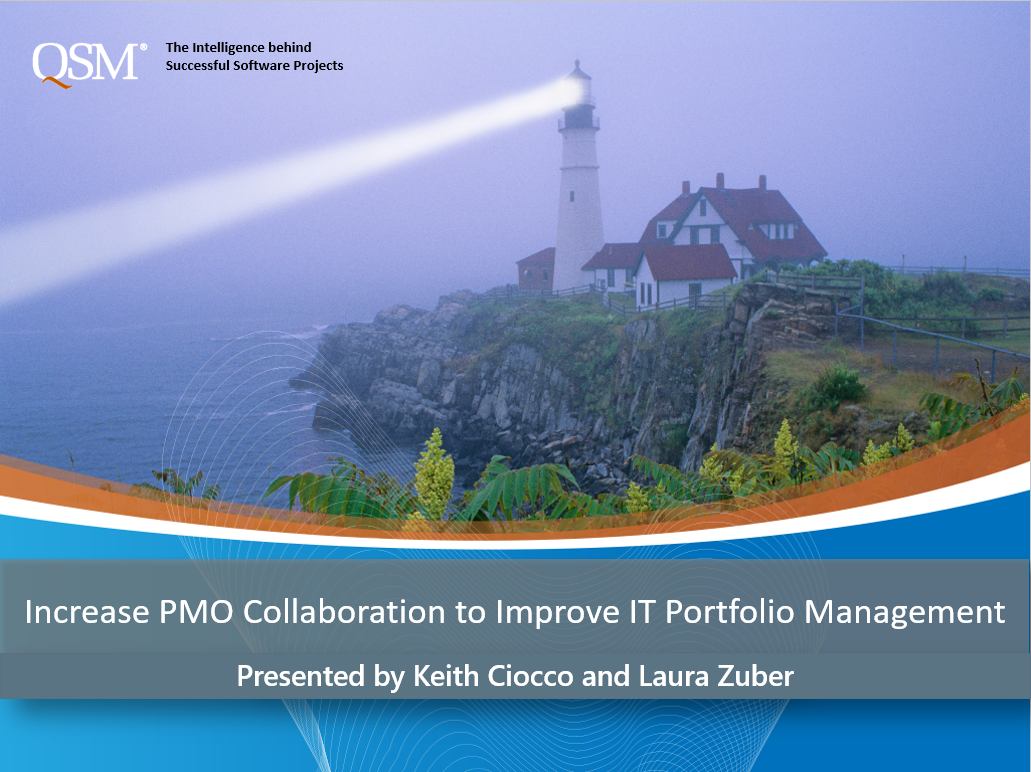 If you were unable to attend our recent webinar, "Increase PMO Collaboration to Improve IT Portfolio Management," a replay is now available.

The onset of COVID-19 has revealed many dependent synergies in the world and their mutual effects on one another.  For example, the decrease in human consumption of fossil fuels, not as many cars on the road nor planes in the air has reduced carbon emissions resulting in cleaner air, at least for the time being.

Another synergistic COVID-19 result affects the IT world, including estimation of software delivery.  Many organizations wisely instilled a work from home (WFH) policy to mitigate the potential spread of disease.  This new work format introduced a fascinating human experiment – can we be as productive en masse during a WFH situation as opposed to being in the office?  The lack of physical proximity stresses the importance of fluid and effective communication.  During pre-COVID-19 days, estimating software delivery was orchestrated through meetings in hallways and conference rooms to communicate project assumptions, constraints and lobbying for project expectations.  But post-COVID-19, we are reliant on remote/virtual contact, limiting the nuances of physical meetings.  Thankfully, there are capabilities in place to make this a fluid process within our SLIM-Collaborate solution.

Imagine a software development process where “Big Picture” estimates can be generated before detailed planning takes place, where the estimates can be accessed on the web, and where only three or four inputs are needed to generate reliable information. This process would include intelligent models that take into account historical data and there would be a back office team that specializes in software customization available to do the heavy lifting. Finally, there would be business analytics and industry data (plenty of both) to help with project target negotiations and risk trade-off analysis.

Thankfully, there are science-based estimation solutions available that include the capabilities mentioned above. These packages can make estimation easier, more transparent, and help manage the uncertainty that can come with early planning. There are technology organizations that are using these types of tools to improve their time to market and the accuracy of their software development estimates.

But there are many organizations that still struggle with estimation. They spend millions of dollars each year developing and delivering software. The planning usually starts with senior management asking tough questions about cost and schedule targets. The project leads then try to come up with effort estimates for each person on the project based on experience and gut feel. These effort numbers are tallied up in spreadsheets to come up with an overall estimate, the numbers are usually negotiated and then a final estimate is born. The problem with this process is that it takes a long time to carry out and the estimates are usually inaccurate. This is because the methods don’t take into account the non-linear relationships, integration, and overhead that we often see in software development.  When the estimates are off, millions of dollars are spent trying to change course. The rest is history.

If you've been using SLIM-Collaborate's convenient, web-based project access to keep your stakeholders engaged and informed, you know SLIM-Collaborate offers streamlined, role-based estimation and data collection services designed to complement our feature-rich desktop tools. SLIM-Collaborate's simplicity and ease of use make it easier to promote consistent standards and practices to users across the enterprise, while seamless data exchange with the SLIM desktop tools lets your most experienced users leverage the power of advanced features.

Recently we talked with SLIM-Collaborate users, and one request stood out: they wanted us to bring Contingency planning into SLIM-Collaborate.  Release 3.1 of SLIM-Collaborate does just that, and even adds new risk buffering capabilities to the probability-based risk modelling available in SLIM-Estimate.  Here's how it all works. 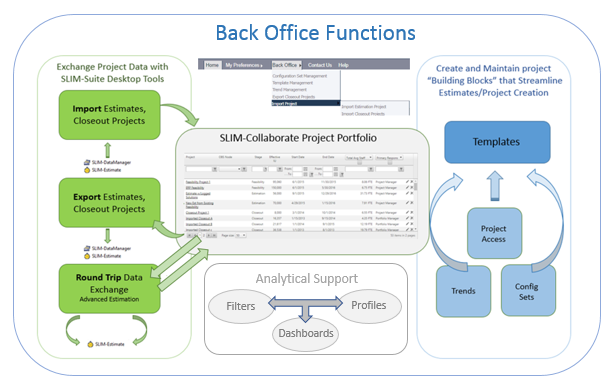 The application of contingency buffer, more commonly known as “padding” or “management reserve” is the final step in any project estimation process.  The most common practice is for the estimator to use an intuitive multiplier which is added to base estimate.  Unfortunately, everyone has a different multiplier which is shaped by their own personal bias about risk and it is hidden in their head.  This creates a fundamental problem with transparency and consistency within most organizations.

Fortunately, there's a better way.  One solution is to define and configure agreed upon standards that are matched to specific business risk situations.  These should be collaboratively agreed to by all the stake holders in the organization.  Then they can be codified into a configuration that can be selected at the time when contingencies are typically applied to an estimate.  This helps solve the consistency issue.

To attack the transparency issue, you can use a technique of overlays to visualize the contingency in comparison to the base estimate. 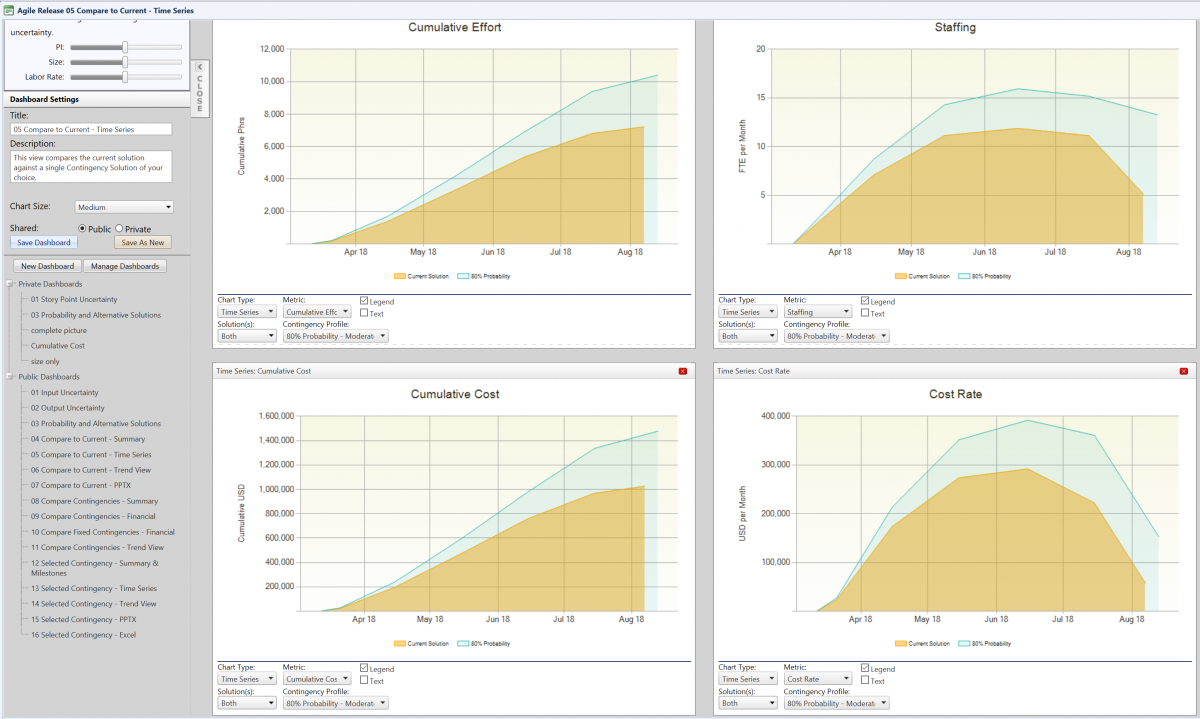 During QSM’s 40 years in business we have often been asked to help with software projects that are out of control and riddled with unrealistic goals and soaring costs. Project managers often ask, "where is the light at the end of the tunnel?" In honor of Larry Putnam, Sr., who started QSM back in 1978, here are 10 tips for better project tracking and oversight.

QSM is pleased to announce the release of SLIM-Collaborate 3.0, the web-based, software-as-a-service version of our trusted software estimation, tracking and benchmarking suite. With more advanced workflow capabilities, the updated version of SLIM-Collaborate enables more efficient communication between stakeholders throughout the estimation process. Additionally, the demand resource capabilities added in SLIM-Collaborate 3.0 make it easier for users to identify staffing needs and allocate resources to a software project.

Highlights of the new capabilities in SLIM-Collaborate 3.0 include: