In response to my previous post, I made a new word cloud for the top 25 programming languages in the QSM historical database from 2008 to present.

One striking difference between this word cloud and the last week's is that the font sizes are much smaller, due to the smaller sample size. Since word clouds use font size to represent size within a sample, this is expected since the entire QSM database is larger than the sample from 2008 to present.

In Programming Language Trends: An Empirical Study, a paper from the New Jersey Institute of Technology, the authors attempt to predict the popularity of programming languages by using regression analysis which focuses on intrinsic and extrinsic factors. 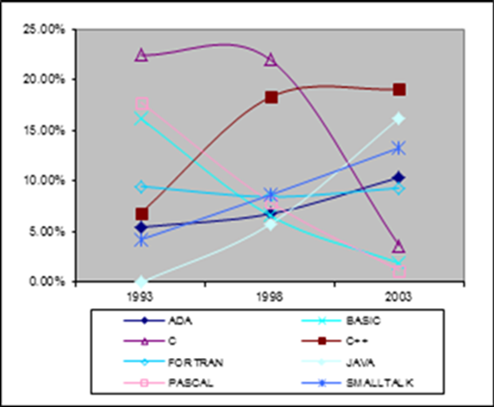 Above is a graph from their paper which shows how many people in their study consider a given language as their primary programming language from 1993 to 2003. While older programming languages like FORTRAN have lost popularity over time, Java increases in popularity. Like my word cloud above, C++ is still pretty popular.

The authors end the paper by explaining that predicting the popularity of programming languages is difficult. Although they created a formula to aid in prediction, it is based on history, "it is valid only as long as the past conditions prevail, it does not reflect the possible impact of the emergence of a popular new language." As we get more data in the QSM database, it will be interesting to see the rise and fall of the programming languages in future word clouds.

Blog Post Categories
Languages QSM Database
We use cookies and similar technologies to provide you with the best possible experience on our website (for personalization, analytics and performance). Agree