While most corporate stakeholders have at least some appreciation for the amount of time and effort required to develop software applications, many have the perception that IT infrastructure projects — such as the build-out of a new data center — simply involves purchasing a list of hardware and having it delivered to a server room.

Nothing could be further from the truth — the reality is far more complex.

In fact, large-scale IT infrastructure projects require an enormous amount of planning, design, configuration and testing to ensure that everything is working correctly and properly transitioned once the work is done. This takes time and resources. Hardware components must be properly configured and connected, and it can be difficult to assess the schedule and duration of projects. Judging the number of resources that will be needed is also difficult, especially when those resources might be in short supply. Plus, there’s always pressure from executives and customers to get projects done in a fixed amount of time.

If IT infrastructure project plans are not based on a realistic estimate of effort and schedule, a whole host of problems can ensue. Projects that are not properly scoped and planned out are not only susceptible to cost and time overruns, but are also susceptible to reliability issues and security vulnerabilities resulting from improper hardware configurations. It’s bad enough to have an enterprise data center for a billing system go down, exposing customer information to hackers and preventing workers from being able to run applications, but what if there’s a flaw in a nuclear power plant’s IT infrastructure?

Thankfully, IT infrastructure planners can use parametric estimation to prevent these problems by leveraging historical data and proven algorithms to produce realistic estimates. Parametric estimates have a huge advantage over bottom-up estimation approaches: planners can quickly run alternative “what-if” scenarios to respond to changing stakeholder requirements. If core assumptions have been established correctly, each scenario will be a “safe” estimate that is backed by historical data. This “top-down” approach is more cost effective and agile than a traditional bottom-up strategy.

IT infrastructure and software development projects share a number of similarities, particularly in regards to their engineering lifecycles. Both types of projects involve a generic four-phase approach to development:

Historical data is derived from similar projects that were successfully completed to create a more effective planning platform. The data can contain valuable insights into what worked (or did not) from previous, similar projects, and provide managers with a solid frame of reference for the cost, effort, and time it will take to complete their own projects.

Now that we have established why parametric estimation should be applied to IT infrastructure projects, let’s take a look at how it can be applied.

With software, the scope of work is measured by the functionality that has to be built. This is done through techniques such as ISO standard Function Point Analysis, which assesses the functionality of the software from a user’s perspective. Functions are given a weighted measurement based on the amount of business functionality they provide to users.

Conversely, IT infrastructure scope is measured by the amount of equipment and systems software that must be installed and configured. Managers compile lists of items that need to be installed, configured, and tested, then use a technique such as SysPoints to apply a weighted measurement to each component in order to quantify the total size of the list.

Once size is quantified, a productivity assumption is made based on a statistical trend line of historical IT infrastructure projects.

The size input of 15,000 SysPoints is then entered into a parametric tool to estimate schedule duration and effort. In this example, we will assume productivity is average vs. historical data from similar projects (which have already been loaded into the parametric tool). The resulting estimate below shows a likely schedule duration of nine months (from elaboration through transition) and a total effort estimate of 3,000 person hours. 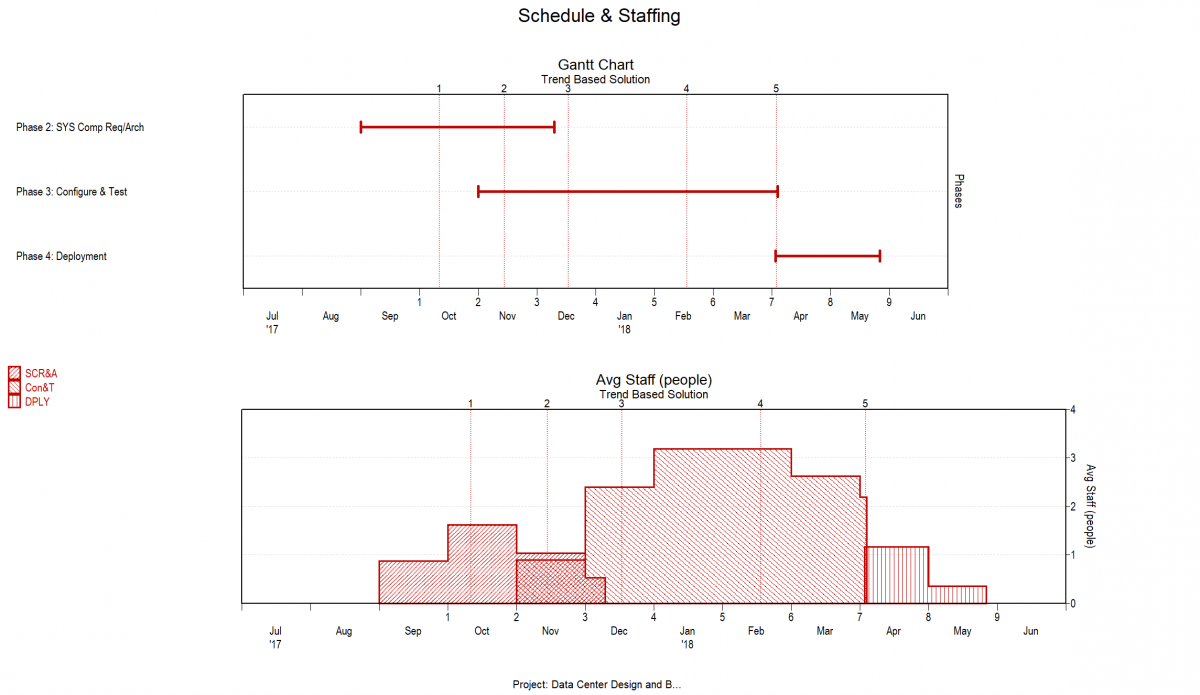 Indeed, in the past few years it has become increasingly obvious that the same principles Lawrence Putnam, Sr. first outlined in 1978 in his Putnam model of software estimation can be writ larger and applied to today’s IT infrastructure projects. The same core principles apply to the development of these projects.

Like their software counterparts, IT infrastructure projects are more likely to be successful -- more efficient, secure, and reliable -- when accompanied by robust estimation and planning processes. Managers are better able to plan and account for schedules, allocate the appropriate number of resources, and make educated adjustments as necessary, resulting in reliable IT infrastructures that satisfy stakeholders needs without sacrificing quality.