An Analysis of Function Point Trends

An Analysis of Function Point Trends

Function point analysis has played an important role in software measurement and analysis for 30 years.  This study looks at the QSM software project database and examines a set of validated projects counted in function points that have completed since the year 2000 to see what they tell about productivity, schedule, and staffing.  We are fortunate to have several thousand projects in this sample to work with as this allows us parse to the data many different ways and still have enough projects to be statistically significant.  For this study only unadjusted function points were used.

Our sample contains 2,231 projects completed since the year 2000.

What does a representative project sized in function points look like?

Figure 1 shows the size distribution of the function point projects.  Only 7% are larger than 1000 FP.

The majority (75%) of function point projects in the QSM database are enhancements to existing systems.  Conversion projects (those with less than 5% new functionality) are less productive than other project types.  A more in-depth analysis of conversion projects is available here.

New development projects are the largest and most productive, but they account for only 16% of the sample.  While extensive code reuse in enhancement projects provides additional functionality that the project does not have to develop, it also creates a more complex development environment for the new and modified code which will require additional analysis to ensure that it is compatible with the existing code and extensive regression testing to verify that there are not unforeseen impacts.

The scatter plot shown in Figure 2, allows the user to see how much a project or estimate is above or below average while providing a visual comparison to the organization’s other completed projects.  While past performance is no guarantee of the future (in the case of an estimate) it can serve to define the boundaries of what is possible. 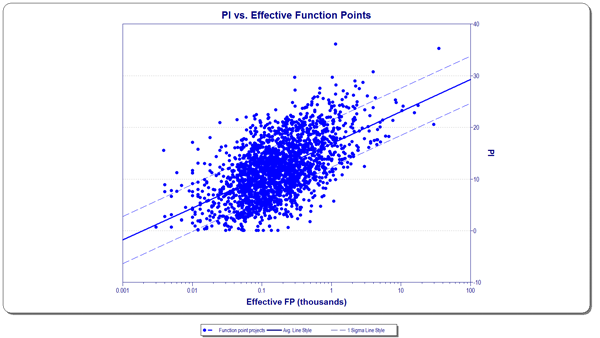 Our research shows that project size has an important impact on productivity, whether measured by our PI or in function points per person month.  Simply put, larger projects are more productive.   While we can only speculate, here are several possible causes. 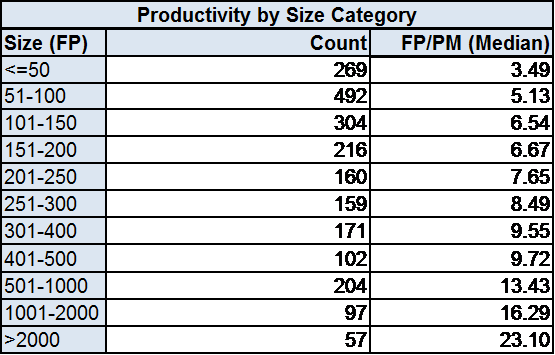 The majority of projects are not multi-million dollar endeavors with dozens of programmers.  61% of the projects in our study expended 30 or fewer person months of effort.  From a cost perspective, at a labor rate of $10,000/person month, the labor cost of these projects was $300,000 or less.  Over 75% of the projects had 50 or fewer person months of effort.  While Table 2 showed that productivity measured in function points per person month increases with project size, Table 3 shows a different trend:  as effort grows, productivity decreases.  Evidently, larger projects that complete are more efficient in their use of labor.  They are more likely to have full time dedicated resources who do not have to divide their attention between multiple projects. 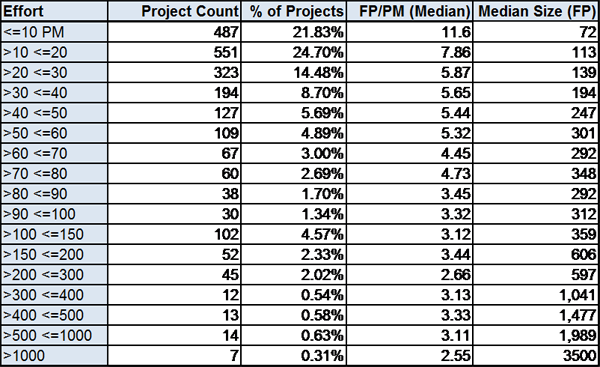 As Figure 3, below, demonstrates, project types differ in the average amount of effort they require.  New development projects expend the most effort, followed closely by Minor Enhancements.  As the median size of New Development projects is nearly twice that of Minor Enhancements, this is strong evidence that what is often considered “free” functionality from reuse actually has a productivity cost associated with it. 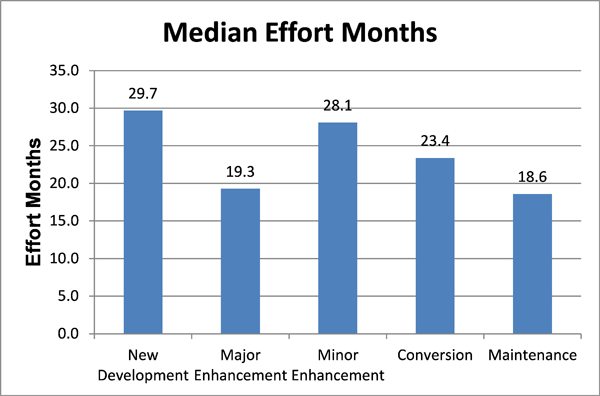 In this section we look at schedule from two perspectives.  First, we examine the schedule distribution of projects.  Then, we look at how schedule compression and extension affect productivity.

As we have seen, the majority of the sample projects are enhancements to existing systems.  The basic framework of the software they modify already exists.  Their purpose is to add new features, modify how existing functionality works – which can include correcting defects -, improving performance, or any combination of these.  In a word, their objectives are normally better defined than new development which has more aspects of a learning process for both developers and end users.  As Table 1 illustrated, their median schedules are slightly shorter.  Figure 4 illustrates project schedule distribution.  Here are some takeaways:

Perhaps an important reason why Agile has become so popular is that it works well with projects that last 7 months or less and produce about 160 function points using 30 person months of effort.  Many lifecycle methodologies and process sets are too large and cumbersome to work effectively with projects where flexibility is a key requirement.

Figure 5 illustrates the relationship between schedule and size (in function points). 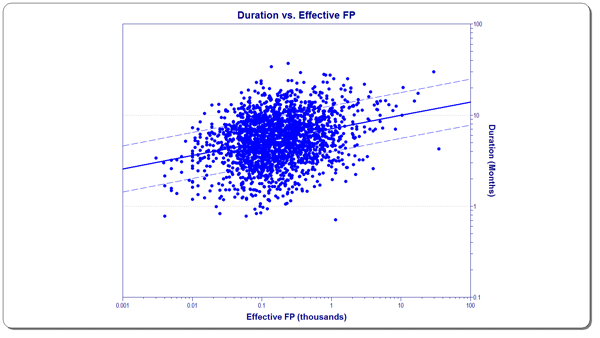 The solid line in the center represents average duration at various project sizes.  The dashed lines above and below the average line represent plus and minus 1 standard deviation from the regression line.   Roughly 2/3 of the projects are inside the dashed lines.  As projects increase in size their schedules generally grow longer, but there is considerable variability: not all projects of the same size complete in the same time frame and project size is not the only factor that influences duration.  Look more closely at the scale on the two axes:  they are logarithmic, not linear.  Simply stated, doubling the schedule does not double the output in function points.  Similarly, reducing schedules by 50% does not cut output in half.

Since the relationship between size in function points and schedule is nonlinear, what happens to productivity when projects are planned with a schedule buffer?  What happens when they must complete in less than average time?  Figure 6 answers these questions conclusively:  the more time projects are allowed, the better their productivity.  While allowing a project more time than average to complete is not always an option, compressing a schedule should only be done in the full knowledge that it will lower productivity and quality while increasing cost. 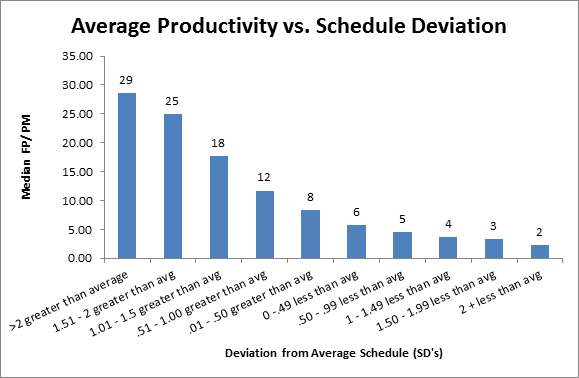 Impact of Analysis and Design

The results were striking.  Projects that spent more effort on analysis and design completed sooner, had fewer defects, and were more productive.  Here we repeat that analysis using our function point sample.  The results are summarized in Table 4. 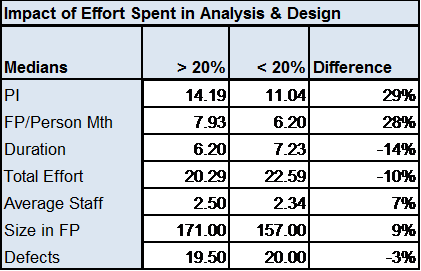 Once again, projects that allocated more than 20% of their effort to Analysis and Design completed sooner, expended less effort, and achieved higher productivity.  They had fewer defects (and that is based on projects that averaged 9% larger).  The data show conclusively that time and effort spent up front defining “What to produce” and determining “How to produce it” result in better productivity, reduced cost, higher quality, and shorter time to market.  Projects that invest up front are better defined and run more smoothly:  something both developers and management can appreciate.

In the year 2013 very few students planning a career in information technology would pick COBOL as their first choice for a software language to learn; but the old war horse still has a significant presence.  While few new development projects are coded in COBOL, enhancements to existing systems (many of them written in COBOL or PL/1) ensure that the market for COBOL programmers is still robust.

The programming language rankings are based on the primary language of function points projects in the QSM database .  COBOL, PL/1, and C++ have demonstrated staying power over time.  Since 2000, Java has grown to be the leading software language.  Powerbuilder was popular for a time; but is no more.  What is not apparent from the table is the increasing number of projects that use multiple languages.  Combinations such as Java for the primary and COBOL as the secondary language are found as enterprises put Web front ends on their legacy systems.

During the 1990s, productivity, whether measured in function points per person month or by the QSM Productivity Index (PI), increased steadily. The upward productivity trend of the 90’s was followed by a precipitous decrease from 2000 on.  Viewed in isolation, this reversal may seem surprising.  But, this trend must be viewed in the context of what changes were going on in industry trends for project size and schedule.  Table 6 summarizes the productivity trend over time in the QSM function point database.  To minimize the impact of outliers, median rather than average productivity has been used.

Table 7 charts project duration and effort over time.  No overall trend is apparent for duration:  projects from 1990 – 1994 had a significantly longer median duration than has been seen in later time periods.  Median duration has varied up and down in a fairly tight range since then.  The trend in effort has been continuously downward.  Projects completed in the most recent time period expended 1/3 less effort than those completed from 1990 – 1994.

Here are the most important observations we have drawn from the project data: