What's Left Behind When Your Project Is Over

The 2012 Olympics are over and it will be another four years until we can all discuss how much we hate NBC's coverage.   Susy Jackson of the Harvard Business Review blog points out in her blog post  that while the games of years past have been huge spectacles  of debt, the London Olympics have attempted to be "green," in that many of the structures built for the 2012 games will be reused for the 2016 Rio games and other events.  Instead of building permanent structures that will be abandoned shortly after the games are over (HBR mentions the " temporary arenas still standing in tatters in Beijing, frogs inhabiting an abandoned training pool in Athens, a forgotten ski jump resting quietly in Italy"), the London Legacy Development Corporation attempted to reuse about one-third of all structures created for the games.

Naturally, this inspired me to find the link between the Olympics and software development.

I think there is much more than buildings that are left behind. There is huge pull of amazing skills, knowledge, technological advancements which if planned and used properly can prove to be a bigger and much more sustainable contribution. However, putting these into use may require more thinking and planning then the reuse of infrastructure.

Like the forward-thinking London Olympics planners, project teams must plan to capture all valuable knowledge.  In essence, when your project is completed, you are left with more than just data.  At the end of the project, you have new understanding of what you did  ("Yes, we did build that in one month with only three people!"), and new understanding of what you can do in the future ("We did that in one month with only three people, maybe we can do more than that in three months with three people").  While you can learn a lot from your own data, there is a lot to be said about what you can learn from the non-data ruins of your last project.

One way to capture your non-data project ruins is to use the Review tab in SLIM-DataManager.  Here, you can use the Significant Factors box to capture qualitative aspects of your project that would help explain its outcome.  The Significant Factors box is completely customizable.  To add a new Significant factor, simply click on the New button, enter a name for your factor, its impact on a scale from 0 (very negative) to 10 (very positive), and a description. 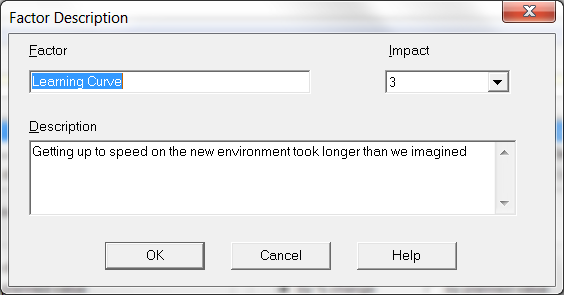 What will be left behind when your project is over?

Blog Post Categories
SLIM-DataManager
We use cookies and similar technologies to provide you with the best possible experience on our website (for personalization, analytics and performance). Agree