Team Size Can Be the Key to a Successful Project

Team Size Can Be the Key to a Successful Project

How many people should I use on my development team?

People frequently ask if there is an optimum staffing level for a software development project? At one extreme, the number of people could be below a critical mass and the project is vulnerable to the loss of a key person. Very small teams are also highly dependent on the skills of the "individual". At the other extreme, large teams experience human communication complexities. Large teams quickly gravitate toward the average skill set of the group. Somewhere in the middle there should be an optimum situation. So, the quick and dirty answer to the question is; yes there is an optimum team size, but it is dependent on a number of variables.Some obvious variables are:

In this research, we set out to find the optimum staffing for a specific application domain and size regime. In this work we will define optimum staff size as the team size most likely to achieve the highest productivity, the shortest schedule, the cheapest cost with the least amount of variation in the final outcome.

To minimize the variables that could impact our results we decided to select a set of medium sized information systems that were completed in the last 3 years. Medium sized was defined as products that contained 35,000 to 95,000 new or modified source lines of code. There were 491 projects that satisfied the conditions. The sample was then stratified into team size groupings, which is shown in Figure 1. Notice that all of the data sets are fairly well distributed across the entire size regime. The average size of all 5 data sets is 57,412 ESLOC. None of the data set averages are more that 3,000 SLOC away from the overall average size.

The average productivity, schedule and effort were analyzed for each of the data sets along with the standard deviation. We plotted the averages and compared them to see which had the best performance and observed overall trends if they were apparent.

The average Productivity Index (a measure that uses size, schedule and development effort in it's calculation) was calculated for each of the 5 data sets.  The Productivity Index for the 1.5-3, 35 and 5-7 person data sets were very similar and had the highest level of efficiency.  The "smaller teams" were 2 or more Productivity Indices higher than the "larger teams".  The 5-7 person data set had approximately 9% less variation than the 3-5 person projects and 12% less variation compared to the 1.5 - 3 person projects.  The variation is displayed using the high-low bars which represent one standard deviation from the average. 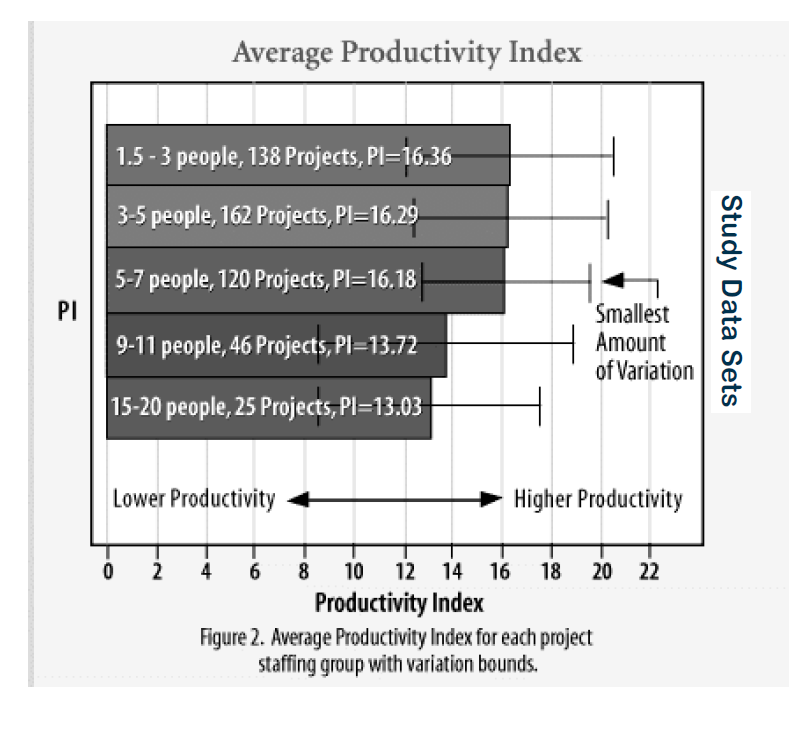 The development effort statistics show that larger teams translate into more effort and cost.  The trend appears to have a exponential behavior.  The most cost effective strategy is the smallest team, however the extreme nonlinear effort increase doesn’t seem to kick in until the team size approaches 9 or more people.

The goal of our research was to find optimum team size for building medium-sized information systems.  We conclude that a 3-7 person team has the best performance (3-5 would be the best, but 5-7 people is a very close second).  Some possible reasons for this behavior are:

Next time you are planning a project think hard about the optimum staffing levels because it can clearly have a significant impact on the overall results.  This study gives you some insights into an application and size domain where many systems are being built today.  Coupled with good peopleware practices you should be able to make a real impact on your organization’s bottom line performance.

Article Categories:
Team Size Productivity Project Management Schedule Effort
We use cookies and similar technologies to provide you with the best possible experience on our website (for personalization, analytics and performance). Agree