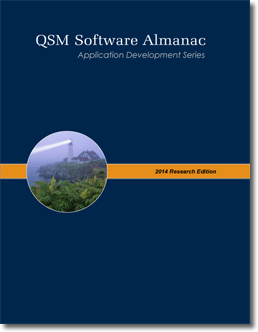 After many months of research, QSM has released the 2014 version of its Software Almanac. A follow-up to the previous version released in 2006, this 200+ page book includes more than 20 articles on topics such as metrics, agile methodology, long term planning, and trends in software development.

The Almanac is one of the few research compendiums that studies how software development has evolved since 1980.  The source of this research is the QSM Metrics Database, which contains data from over 10,000 completed software projects from North and South America, Australia, Europe, Africa, and Asia, representing over 740 million lines of code, 600+ development languages, and 105,833 person years of effort.

This year’s Almanac focuses on agile methodology, which has generated increased interest since the 2006 release. Specifically, it takes a close look at projects that have been based on agile methodologies and successfully completed within the past five years. The Almanac also includes information and insights of interest to executives and project managers. In particular, it features an updated long-term trends analysis of the QSM Metrics Database, as well as new tables for both function points and benchmarking.